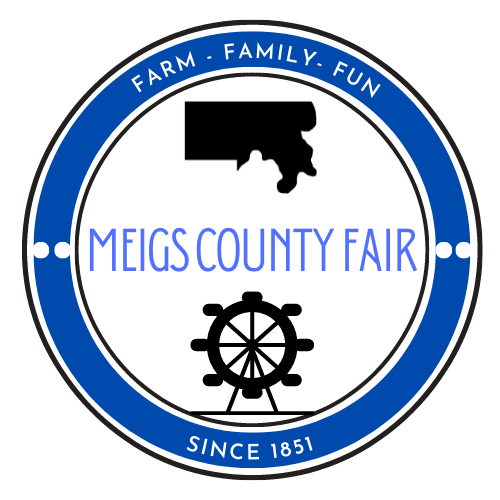 About The Meigs County Fair

If you are interested in making a tax deduction contribution to the Meigs County Fair – you can simply earmark those funds to benefit The Meigs County Agricultural Society. You can sponsor a building project, an event, a day or help with Junior or Senior Fair activities and enjoy the tax deductibility (as allowed by law).

In 1858 fairgoers enjoyed a concert ball and fireworks and following the 1859 fair, the intention of the managers was to either enlarge the grounds the coming year, or move the locality.   Evidently the grounds were not enlarged, for the tenth annual fair was held at Racine, September 19 and 20, 1860.  Officers for the next term were W. B. Strong, president; J.R. Ellis, vice president; O. Branch, treasurer; Dr. J. R. Philson, recording secretary l. Paine, corresponding secretary; and J.J. Combs, William Foster, Thomas Fesler, G. B. Forrest and P. Fisher, directors;  Samuel Titus, Chief Marshal and George Stivers, Assistant to the Marshall.

Because of the excited state of the country no fair was held in 1861 and 1863.  Although no local papers are available for 1863 and 1864, it must be assumed that the fair was again postponed in 1863 and 1864, since the county itself had experienced a raid and battle activity associated with the Civil War.

In 1865 the fair was again held and racing had been added to the fair program. And was a highlight of the annual event.  The first part of the Rocksprings Fairgrounds was purchased in 1868 from Leonard and Jane Carleton and consisted of 10 1/4 acres.  A second tract was secured from the Salisbury School Board in 1859.

On December 24, 1899 an additional 98 rods more or less, was deed to the Agricultural Society by Jane Carleton.  In 1889 the race track was enlarged from a one-third mile track to one-half mile.  The amphitheater was built the following summer in time for the September 1890 fair.  “It easily seats one thousand persons and commands an entire view of the race course.  A back view of the grandstand is as attractive as the front.  It consists of hash stalls whose counters bristle with ham sandwiches, gingerbread and birch beer,” reported the Meigs County Tribune.

1952 the 89th annual fair was held, marking the 10th annual Junior Fair to be held in conjunction with the Meigs County Fair.  A Junior Fair Board consisting of representatives from various groups which comprise the Junior Fair activities has been in effect since 1946.

Throughout the 1970s, 1980s, 1990s and 2000s the Meigs County Fair has continued to grow and many improvements to the grounds have been made. The grandstand, built in 1890 still occupies its place alongside the race track.   Research for this history was compiled from the Meigs County History Book, Volume three.